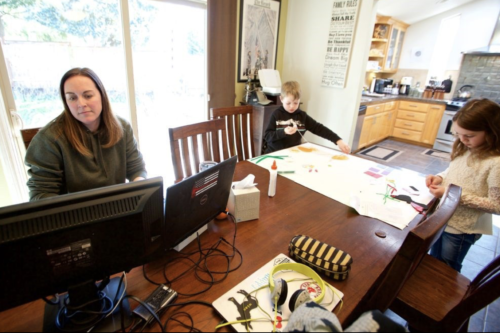 Like any single parent to two school-aged children, Amanda was used to juggling a lot: school schedules and activities, playdates, two part-time jobs – including one in the restaurant industry – the list goes on. Amanda was already struggling to make ends meet when the coronavirus pandemic hit. Like millions of other Americans, Amanda was laid off from both of her positions. She immediately applied for unemployment compensation, but she still hadn’t received confirmation of her eligibility, let alone any benefits, by the time rent was due. There was an eviction moratorium in place, but her landlord was still pressuring her to pay up.

The support of individuals, foundations, and corporate partners made it possible to quickly ex- tend help to Amanda and her family. With donated funds, Open Hearth was able to pay Amanda’s April rent, giving her some breathing room until the backlog of unemployment filings could be processed. This also took away some stress so Amanda could focus on getting internet service for her kids’ virtual schooling and support them through these trying times.

Donors’ generosity provided critical funding for another single parent in our community. David had been working as a chef when all business came to an abrupt halt. Like Amanda, David’s unemployment benefits were delayed, and he was coming up short when it was time to pay his rent. Open Hearth was able to direct donated funds to David’s landlord to ensure David and his young daughter could remain stably housed.

Over the past six months, Open Hearth has been able to meet the urgent needs of dozens of families who lost income and were struggling to remain in their homes. We’ve also been able to help with budgeting, goal setting, and social service referrals so each client has a plan to move forward.